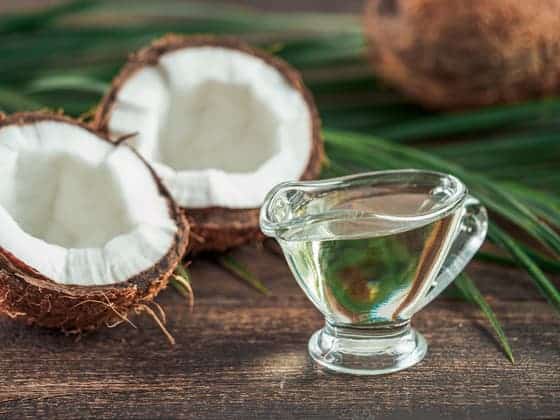 There are many reasons someone would consider using MCT oil as part of their diet. But when it comes to weight loss products, MCT oil probably won’t be the first thing that springs to mind.

We’re here to tell you that MCT oil can most definitely help you lose weight and that there are several reasons why.

So, if you’d like to find out more, continue reading as we cover exactly what MCT oil is and what kind of role it can play in the weight loss process.

What is MCT Oil?

Sourced from coconut oil and palm kernel oil, MCTs are a group of saturated fats that, instead of being stored as fat, are instead easily absorbed by the body. The body then converts these MCTs into a fuel source that cells turn into energy.

Pure MCT oils are often made using a combination of coconut and palm oil rather than using one or the other on its own.

The reason behind combining the two is because, on their own, these two plant-based sources also contain Long-Chain Triglycerides. These tend to get stored as fat, which often results in weight gain.

Luckily, there are high-quality MCT oils available on the market, containing only C8+C10 MCTs from organic coconuts.

Products such as these are proven to play a significant role in appetite control, fat loss, and keto support. So, it certainly pays to do your research beforehand so you can avoid the many poor-quality products scattered across the market.

What Are The Benefits of MCT Oil?

As touched upon in the previous section, taking MCT provides certain health benefits – one of which is the promotion of weight loss.

A large reason for this is the release of hormones peptide YY and leptin when taking MCT Oil, which can trick the body into thinking it’s full.

It was also found that those taking MCTs at breakfast ate less at lunch than those consuming coconut oil – a tremendous benefit to anyone attempting to reduce body weight (3).

Taking MCTs while on a low-carb diet such as a ketogenic diet could also help support body fat loss by allowing you to stay in the fat-burning state known as ketosis.

As well as its potential to promote weight loss, MCTs could have other significant health benefits. For instance, MCT Oil is easily absorbed and transported throughout the body, meaning it can be immediately used as a source of energy.

Therefore, taking MCT Oil before a workout could result in you using more fat than carbs, reducing the need for carbs during exercise.

People living with Alzheimer’s and Autism could also benefit from taking MCT Oil due to its ability to improve brain function, also a plus for people with epilepsy.

Because MCT oil has been shown to have the potential to support both weight loss and fat loss, taking it regularly could reduce the risk of heart disease.

Finally, MCT oil’s ability to burn fat and reduce its storage could also be of significant benefit to those living with diabetes, enabling them to control blood sugar levels better.

What Does MCT Oil Do For the Body?

MCT oil can help the body produce ketones, an energy source for the brain containing no carbs.

Some also believe that drinking the oil could sharpen the mind. And while this is likely the case for anyone suffering from a cognitive disorder, it’s unlikely to have any significant effect on anyone else.

MCT oil can be useful for anyone who suffers from skin infections as well, with marked improvements reported in those who take MCT oil consistently.

This is because MCT contains lauric acid, which works as an antimicrobial that helps break down bacteria and virus walls to promote smooth skin and treat infections.

MCT oil could potentially have some very significant health benefits for those who choose to take it regularly.

For example, for anyone living with Alzheimer’s, Autism, or epilepsy, taking MCT oil could well see some improvements because of its ability to improve brain function among sufferers.

It also contains fatty acids that could quite easily help anyone who takes it meet their weight loss goals by reducing fat and leading the body to believe it’s full.

Even a modest weight loss could have other significant health benefits, including the reduced risk of heart disease and better control of blood sugar levels for people with diabetes.

So, it’s clear that MCT oil can positively influence your weight loss efforts, despite many suggesting the opposite is true.