How Much Ashwagandha Should I Take? – Complete Guide to Withania Somnifera 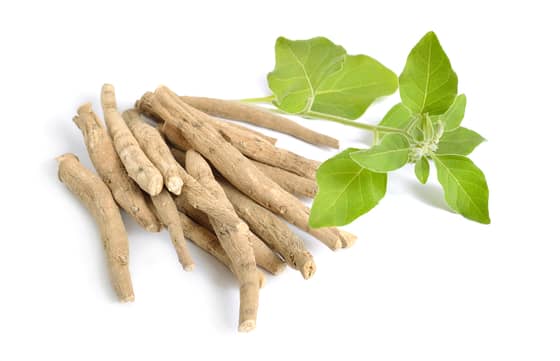 If you’re looking for an answer to the question – how much ashwagandha should I take? You’re in the right place.

Ashwagandha, which is also known as Indian Ginseng, has been used for centuries in Ayurvedic medicine. This herb was traditionally found growing in India and Nepal’s mountains, where it was valued as a natural remedy against many ailments.

Suitable for taking orally or applying to the skin, Ashwagandha comes with many health benefits when taken regularly, with research suggesting it can boost sexual function, increase muscle size, reduce chronic stress levels, and much more.

But if you’re asking yourself the question, what is the ideal ashwagandha dosage? The quick answer is 500 mg – 600 mg per day would more than suffice.

Continue reading to find out everything you need to know about the ashwagandha plant, including what it does, if it’s safe to take regularly, and if it has any side effects, among many other things.

Ashwagandha is an adaptogenic herb with yellow flowers that can be found natively in India and North Africa. Its botanical name is Withania Somnifera (sleep-inducing), but it also goes by other names, including Winter Cherry and Indian Ginseng.

Ashwagandha has been used traditionally for about 3,000 years to heal various ailments like stress disorders or arthritis, thanks to the properties of an adaptogen that helps your body manage stressful situations better.

Containing alkaloids and steroidal lactones such as withanolides, tropine, and cuscohygrine, ashwagandha withania somnifera boasts many health benefits that make it a useful inclusion in many health supplements available today.

But what exactly are these benefits? And does it have any side effects?

Continue reading as that’s what you’re about to find out in the next section.

What Are The Benefits of Taking Ashwagandha?

The benefits of taking an ashwagandha supplement are plenty. In this section, we’ll look closer at some of its most common uses that scientific research has proven. But for those looking for a quick overview of Ashwagandha’s benefits, here they are:

Read on as I take a closer look at Ashwagandha’s benefits and the scientific research behind them.

More On The Benefits of Ashwagandha

One of the most significant benefits of ashwagandha is its ability to reduce cortisol levels and help those with adrenal fatigue [2]. These are issues affecting millions of people across the globe, and so it’s well worth considering ashwagandha if you experience symptoms such as these.

Ashwagandha can also help reduce stress and anxiety while boosting your immune system and relieving insomnia, which is important if you’re looking to lead a healthy and happy life.

Another interesting thing about ashwagandha is its ability to strengthen the immune system by increasing natural killer cells (NK cells) [3].

NK cells are your body’s first line of defense against viruses and cancerous tumors, which could be a significant benefit for anyone fighting off illnesses or trying to prevent them.

As if that wasn’t enough, research also shows that ashwagandha supplements can significantly influence testosterone levels in men (more on this later).

Does Ashwagandha Have Any Side Effects?

Ashwagandha is a plant that has been around for centuries and is widely known for its many health benefits.

Thanks to the many scientific studies conducted on it over the years, it is considered to be generally safe for most people. Therefore, you should experience no side effects when consuming it regularly.

With that being said, it has been reported that taking large doses can cause symptoms such as an upset stomach, diarrhea, and vomiting. But as long as you don’t exceed 600 mg per day, you should be absolutely fine.

In the last section, we looked at just some of the many benefits ashwagandha has for your body and brain, but one reason it’s gained additional traction in recent years is its ability to boost testosterone levels.

A 2010 study involving 75 infertile men found that ashwagandha treatment resulted in increased sperm count and mobility, along with a significant increase in testosterone levels [5].

Given the results of studies such as the above, it’s safe to say that ashwagandha is an incredibly useful supplement for those struggling with low testosterone levels and/or poor sperm count and mobility.

That’s not to say that ashwagandha is the only ingredient you should regularly consume to boost your T levels, as there are several other T-boosting ingredients that ashwagandha goes hand in hand with. Here are just some of the most effective:

How Long Does It Take For Ashwagandha To Work?

As you’ll now be aware, Ashwagandha is a powerful herb that can help to balance out your mood, relieve anxiety, and increase energy levels. So, it’s safe to say that there are many reasons you should consider supplementing it regularly.

There’s also no denying that ashwagandha can be hugely beneficial when it comes to boosting testosterone levels in men, among many other things. But how long does it take to work?

The quick answer is that it depends, as it will vary depending on your personal circumstances, including your health status, which form of ashwagandha you’re using, and the strength & quality of your chosen supplement.

With that being said, those who lead a healthy lifestyle that includes a well-balanced diet and regular exercise should see beneficial effects of ashwagandha in as little as two weeks.

But while a healthy lifestyle can go a long way in allowing you to make the most out of regular ashwagandha consumption, that’s not the only factor you need to consider.

More than one form of ashwagandha is available nowadays, with each of them being incredibly useful in their own right.

The form of ashwagandha that works best for you will depend on your circumstances, but does one stand out above the rest? Find out in the next section!

What Is The Best Form Of Ashwagandha?

In the current day and age, two forms of ashwagandha, in particular, are hugely popular around the world – Sensoril and KSM-66.

Each of these is a patented, clinically tested ashwagandha extract that boasts highly concentrated levels of withanolides. For those that aren’t sure what withanolides are, they’re simply the active ingredients in ashwagandha.

Sensoril is often regarded as the most potent out of the two aforementioned forms of ashwagandha. Its reported benefits include the promotion of restful sleep, fatigue resistance, and support for cardiovascular health.

KSM-66, on the other hand, offers the highest concentration full-spectrum ashwagandha extract available today, making it a fantastic inclusion for male health supplements, including an all-natural testosterone booster.

KSM-66’s benefits include the promotion of strength and muscle recovery, enhanced stamina and energy, along with support for cognition and memory.

Human studies also suggest that KSM-66 can increase testosterone levels by as much as 17% while boosting luteinizing hormone by 34%.

And while it’s not as powerful as Sensoril, regular users say that KSM-66 is just as effective in terms of its stimulatory and energizing effects, along with its support for healthy stress levels.

Now that you’ve found out the best form of ashwagandha, the next step is to find a supplement containing KSM-66 on its ingredients list.

But even if a supplement you’re considering contains KSM-66, it’s vital to opt for a product that features a series of other optimally dosed, science-backed ingredients.

Boasting a clean and natural label, Testo Lab Pro® stacks together five cutting-edge ingredients to create the safest, highest-quality, and most effective testosterone booster on the market.

On its ingredients list, you’ll find the mighty KSM-66 Ashwagandha in a clinically backed 600 mg dose, along with the following:

What’s not to love about that?!

Conclusion – How Much Ashwagandha Should I Take?

By this point, it should be clear to you just how useful ashwagandha can be when it comes to reducing physical & mental stress, increasing muscle size and strength, virility, and physical endurance.

You can reap the rewards that ashwagandha can bring by consuming it regularly in a dose of around 600 mg, with higher doses than this unnecessary if you’re looking to boost testosterone levels and enhance masculinity both safely and naturally.

KSM-66 most definitely has the edge when it comes to boosting masculine energy. So, if that’s important to you, I’d highly recommend choosing a testosterone booster that contains this form of ashwagandha above other forms, such as Sensoril.

However, if raising T levels is high on your priority list, it’s going to take more than a regular consumption of ashwagandha to achieve this. That’s why you’ll need to opt for a testosterone booster which comprises the safest, cleanest, and most proven ingredients available. Testo Lab Pro® more than fits the bill in that regard.

Ashwagandha is undoubtedly an important testosterone-boosting ingredient. However, when combined with other science-backed nutrients including Mucuna Pruriens Extract, D-Aspartic Acid, and Luteolin, you can safely and naturally combat the decline of testosterone which occurs during the aging process.